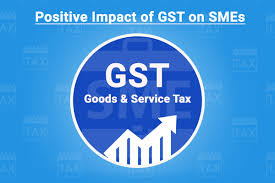 We strive to be the Best GST Consultant in India and accordingly, we keep on updating our clients through various articles and newsletters. Small and medium-sized enterprises commonly known as SME or MSME’s contribute a lot to the Indian economy and are considered as the backbone of the Indian Industry. Here through this blog, we try to brief you about the benefits of GST for SMEs. Busineowners who want to file annual GST return, for this purpose they can get references from nearby well-known GST consultants. There are many rumors against GST being harmful to the MSME’s, here we try to clear the misconceptions of the public at large.

In a developing country like India, the government collects most of its tax revenue indirectly from its people when consumers purchase goods or avail services. The contribution of direct taxes in the GDP of India is lesser due to the unequal wealth distribution pattern of the economy. GST has been a mixed bag of opportunities and challenges, especially for SMEs. Here are a few benefitting aspects of GST for SME’s.

There are certain myths or rumors across the country regarding negative impact of GST on small business, however, thru this article, we tried to provide positive insights of GST on SMEs. We want to remember you that the government is also trying to make income tax return filling online simple for the current financial year by introducing new income tax reforms Faceless assessment, Faceless Appeal, and Taxpayer charter.

We hope you liked this article, for any query or clarifications, please feel free to reach out at info@pgaca.in